Mother Nature created wheat in its natural laboratory over millions of years. Discovery of its nutrition, versatility, and taste began in phases, starting approximately 20,000 years ago when anthropologists believe the first humans began eating the seeds out of the heads of wheat. In Jordan, in 2019, archeologists discovered hearths where wheat had been ground and made into flat bread 14,000 years ago. Between 10,000 to 12,000 years ago, farming began in the Fertile Crescent of the Middle East, spreading across countries that now include Syria, Lebanon, Egypt Jordan and Turkey. Farming wheat meant the end of the hunter/gatherer lifestyle of prehistoric man and the beginning of civilization. Whether you eat it or not, we are all children of wheat.

Wheat is the world’s most essential crop, providing 20 percent of calories necessary to feed the planet’s seven billion people (expected to grow to nine billion by 2050). Mechanization of the industry took place in the early 1900s. Fertilization and herbicide use were revolutionary, coming largely after World War II. For many years, farmers depended upon tillage and plowing, resulting in hundreds of tons of soil being lost through erosion. Programs to mitigate erosion have been wildly successful, reducing soil loss by up to 85 percent. 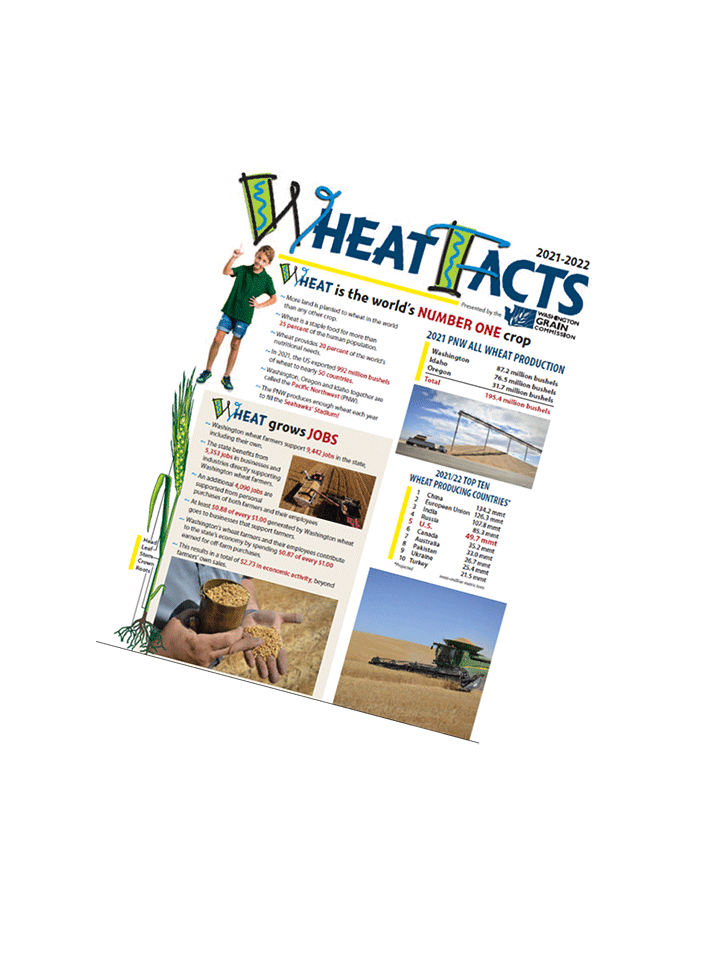 No genetically engineered wheat is grown in the United States. Domestic and overseas customers made it clear in the early 2000s that growing GMO wheat would disrupt markets. Monsanto, (now Bayer) the company developing GMO wheat abandon the project. While other crops like corn, soybeans, canola, cotton, sugar-beets, even papaya, include a GMO alternative, wheat does not.

About 80 percent of the wheat grown in Eastern Washington is soft white wheat, one of six classes grown in the U.S. It is used for cookies, crackers, pastries and Asian delicacies including sponge cake.
Other wheat classes include hard red winter wheat grown in the Midwest and hard red spring wheat grown along the northern tier of the country. Both are used in making bread. Soft red winter wheat is primarily grown east of the Mississippi and is used in similar products as soft white. Hard white wheat has a foothold in Kansas, Colorado, Idaho and Nebraska. It is being used to make whole wheat white bread. Durum wheat, used for pasta products and couscous, is primarily grown in the desert Southwest, North Dakota and Montana.
About 20 percent of the wheat grown annually in Washington is sown to hard red winter or hard red spring wheat. Depending on the year, Washington ranks from the third largest to the fifth largest wheat producing state in the nation.

Eastern Washington has numerous unique micro-climates. Wheat in the region is grown under precipitation regimes from eight inches (20.32 cm) of annual moisture to over 25 inches (63.5 cm). The bulk of Washington’s precipitation comes during the winter.

Production in Washington has three main growing regions based on precipitation: low, intermediate and high. Whitman County, which is situated within the rolling hills of the Palouse, produces the most wheat of any county in the U.S. and receives more than 20 inches of precipitation annually. Walla Walla County, near the Oregon border also receives nearly as much precipitation and is very productive
The vast majority of wheat acreage in Eastern Washington, however, is in the low and intermediate precipitation zones, receiving annually from 8 to 15 inches of moisture in the form of snow and rain. Much of this land is summer fallowed, that is, the land is only cropped every other year to allow the ground to rest a year between crops to accumulate moisture. 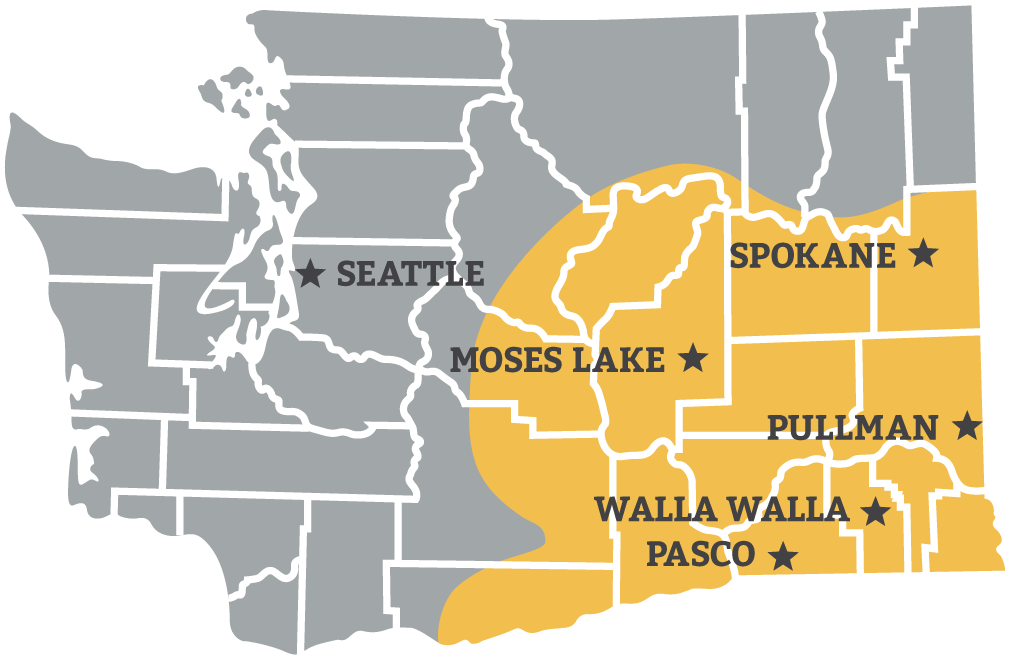 Get the most recent annual reporting on Washington wheat production volumes.

Get information on bulk wheat purchasing from and exports from Washington’s wheat suppliers and their national partners.