The Hessian Flies Are Coming! What Are Researchers Doing About It?

Since starting at Washington State University in 2010, I’ve seen Hessian fly infestations that caused significant losses in both production fields and test plots.  The first time I wrote about Hessian flies in Wheat Life, was in April 2013 due to concern at that time.  Fast forward six years. Now, when I visit spring wheat fields across Eastern Washington, the problem is worse, with infestations heavier and more widespread. Making matters worse, damage in winter wheat is being reported more often.

Hessian fly damage is not new to the area.  Damaging infestations have been seen west of the Cascades for more than 90 years, since before the 1930s, certainly. In the late 1970’s to early 1980’s, Hessian fly was recognized as a widespread pest throughout the Columbia Basin in Eastern Oregon and Washington, and in northern Idaho prompting research, breeding and management efforts.

Hessian fly pressure is not the same year after year, location after location, or even farmer to farmer because of many factors that influence infestations. Hatching is strongly dependent on suitable temperatures and is stimulated by rainfall events. Factors like date of planting may have a major impact depending on how crop development aligns with Hessian fly hatching.  This is particularly true for winter wheat. A practice used to manage fall infestations across North America is to delay planting too early, while flies are active.

Several parasitic wasp species have been found that target Hessian fly in the PNW and parasitism is thought to be a factor in fly population dynamics.  As a result of all these variables, Hessian fly impact on dryland wheat production regions in the inland PNW is variable.

I am often asked about the efficacy of insecticides for Hessian fly management.  Research is lacking, but available scientific literature concludes that aerial applications targeting Hessian fly females during their egg laying is problematic and does not reliably generate a return on investment.  The inconsistent hatching of fly populations, the long window of fly hatching in the spring and difficulty in accurately timing insecticide application are all factors.

The prevailing scientific opinion from those U.S. regions with Hessian fly is that seed treatment insecticides may help protect winter wheat infestation of Hessian fly more than spring planted wheat infestations.  Our experience planting spring wheat variety trials around the state is that susceptible varieties suffer significant yield losses due to Hessian fly in many locations each year. This is despite seed treatment insecticides that are applied to all variety trial entries.

Winter wheat production fields with significant Hessian fly pressure have been reported in Walla Walla and Columbia counties the past few years, as well as under irrigation in central Washington.  It’s likely an unusually warm spring allowed multiple cycles of infestations compared to historical data that indicates a single cycle is more common.

With funding from the Washington Grain Commission and collaboration with the University of Idaho’s entomologist Nilsa Bosque-Perez, we have made strides in understanding Hessian fly resistance in winter wheat varieties.  For the first time ever, we screened public and private soft white winter wheat varieties, representing almost all PNW acres, and found that 39 out of 40 of them were Hessian fly susceptible. Only one new club wheat variety, ARS-Castella, had moderate resistance to Hessian fly.

This phenomenon greatly prolongs the effectiveness of the resistance genes we use in spring wheat. Refuge acres/areas are required in Bt– trait crops like corn and cotton and are also used for Orange Wheat Blossom Midge-resistant wheat varieties in Canada.

If winter wheat varieties contain the same genes as spring wheat varieties in the region, those genes are more likely be defeated more rapidly as a result. WSU winter wheat breeder Arron Carter has started breeding for resistance by using germplasm from the southeastern U.S. with Hessian fly resistance.  The WSU spring wheat breeding program is focused on using our existing resistance genes, while bringing in genes that have not been used in the PNW or in the southeastern U.S. 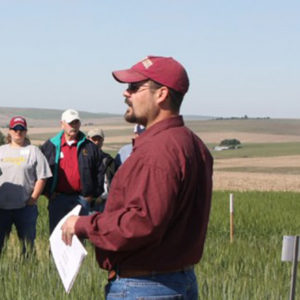