An irony of Ashley Cannon’s career is that her goal of becoming an astronaut returned her to earth to investigate some of the most basic mechanisms of plant biochemistry.

Cannon, who has a Ph.D. in plant biology, was hired by the Agricultural Research Service (ARS) of the U.S. Department of Agriculture to fill a new wheat quality position located on the Pullman campus of Washington State University. Specifically, Cannon will research the mechanisms that cause low falling numbers in wheat. Both preharvest sprout (PHS), which is the phenomenon that occurs when rain falls on ripe crops, and late maturity alpha-amylase (LMA), induced by a cold shock in the spring, have been identified as culprits.

But while PHS is something farmers can see occurring in real time when rainstorms and cool weather occur before crops can be harvested, LMA only raises its head when the crop is sampled after harvest and a falling number test is conducted. In 2016, when it appeared a bumper crop would help heal farmers’ bottom lines, millions of dollars were lost to a discount farmers could neither see nor anticipate. Although Cannon will be responsible for investigating both triggers, LMA is by far the phenomenon that farmers most want to avoid. And Cannon believes she’s up to the job.

“I come with a new perspective and a pretty big tool kit, and I’m really interested in the problem. I had a plan to approach the problem the day I interviewed,” she said.

With a father who was in the military, Cannon moved among his various assignments as a youth, most of which were in Texas, along with five years in Nevada. Because of her interest in becoming an astronaut, she focused from a young age on math and science and even got to work with plants grown on the International Space Station. Her undergraduate degree was in chemistry with a minor in math. Her Ph.D. dissertation, which she completed at the University of Texas in Austin in 2016, investigated how gravity directs plant growth both on earth and in space.

Given the fact that long space voyages will require food to be grown while on route, figuring out the biology of plants in an environment without gravity is paramount. On earth, a sprouting seed knows the direction to grow based both on gravity and light, which bears asking a question on the minds of many biologists today—are plants intelligent? Some scientists have recently suggested they are. Cannon is more circumspect, saying that while she believes plants can sense and respond to their environment, they do so at a level different from people.

“A plant doesn’t know if it’s sad, but it definitely knows it’s cold. We have many different types of intelligence, so I don’t think plants have what we describe as human or animal intelligence, but they have evolved sensitive tools to sense what is going on around them. On the question of plant intelligence, I’m in the middle,” she said.

Cannon comes across as a person for whom satisfying her own scientific curiosity is, at least, part of the goal. After receiving her Ph.D., she did postgraduate work at the University of North Texas. There, she kept her focus on plant-signaling pathways, but instead of looking at the effects of gravity, she began to investigate lipid signaling. Without going into too much detail, a lipid is a molecule that can store energy, signal and even act as a component of cell membranes. A lipid messenger can affect specific cellular responses.

Or, as Cannon put it, “There are so many things that plants use that have versatile functions and can provide signals to neighboring cells, or within the cell itself, that helps the cell react to a particular change.” Put another way, if you thought gene expression was the only important thing going on in plants, think again.

Although there were many individuals who applied for the new ARS position, Cannon believes she was the successful candidate because, “I brought a new perspective, a special skill set that others working on this issue don’t have. I think (the hiring committee was) looking for a broad background as a molecular biologist and a biochemist, which is a skill set not many have. I’m a molecular biologist that, instead of using genomics, uses chemistry.”

Cannon has prepared her own analysis of the PHS and LMA phenomenon, highlighting how plants sense and respond to their environment, and how these signals regulate plant development. A large part of her effort will be to determine how to identify susceptible wheat lines far earlier in the breeding process by identifying molecular markers that can be used by breeders to avoid the lines that are susceptible. At the same time, she hopes to develop tests that differentiate between PHS and LMA, as some studies have shown the latter has less impact on end-use quality.

“I think LMA is caused by a combination of both genetic and environmental causes, but what is happening is happening at the molecular level. I’m hoping to identify regions within the wheat genome that may be different in a variety that is susceptible from a variety that is resistant. It all starts with the genome. Molecules are derived from products of the genome. They’re not different. I’m just looking at it from a different point of view.”

But is it really necessary to know at the molecular level the plant signals that lead to LMA? Isn’t another approach simply to ensure that no new varieties are released that are susceptible to the phenomenon, a practice which is followed in Australia by using cold shock to induce the phenomenon, and not releasing any varieties that fail?

She agrees that is one approach, but it only finds the bad actors near the end of the breeding cycle. Developing molecular markers to identify LMA-susceptible lines, on the other hand, allows much higher and faster throughput, and as any breeder will tell you, breeding is all a numbers game. Not to mention, LMA hasn’t always existed at the level it exists now.

“We need to be proactive so we can begin to develop lines that aren’t susceptible. I think what we will discover is that there are many things in a plant that can lead to low falling numbers. Continuing our study may solve the current problem, but by being proactive, we will be able to identify issues that may come up in the future. Consider the pandemic. A lot of people said it came out of nowhere, but what it came out of was people not staying proactive and continuing to monitor whether we have coronaviruses in particular areas of the world. I’m interested in staying ahead of the problem, instead of what happened in 2016 when there was a massive problem we are now trying to fix,” she said.

This article originally appeared in the March 2021 issue of Wheat Life Magazine. 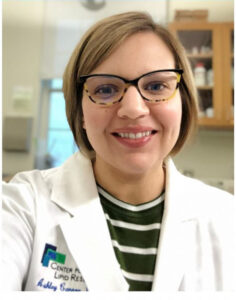 Ashley Cannon, Ph.D., is a research molecular biologist with the Wheat Health, Genetics and Quality Research Unit at the USDA-ARS in Pullman, Washington. Her research is focused on identifying the biochemical, molecular and physiological mechanisms that lead to low falling numbers in wheat.