Rising to the challenge of falling numbers

A farmer invests a great deal in a crop and needs varieties and management practices that reduce the risk of financial losses from stressful weather. Weather issues cost Washington farmers an estimated $130 million in falling numbers discounts in 2016, and there have been some falling numbers problems as recently as 2020. The falling numbers story is largely about alpha-amylase, a starch-degrading enzyme produced in wheat grain.

Too much starch degradation by alpha-amylase can result in fallen cakes, sticky bread and mushy noodles. The milling and baking industries judge the risk to quality using the Hagberg-Perten Falling Numbers Method to measure alpha-amylase activity in wheat meal. The falling number (FN) is the time, in seconds, needed for a plunger to fall through a “gravy” made of heated wheat meal in water. A lower FN indicates more alpha-amylase activity because its digestion of starch chains reduces the ability to gel when heated. Farmers receive discounts for a FN below 300 seconds. 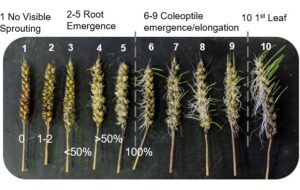 Low falling numbers can be caused by preharvest sprouting or late maturity alpha-amylase (LMA). Rain on mature wheat before harvest triggers preharvest sprouting, the initiation of grain germination while still on the mother plant. LMA is caused by cool temperatures during the late grain filling stage of development, specifically the soft to hard dough stage. The presence of alpha-amylase from LMA cannot be detected by the human eye. In advanced cases of preharvest sprouting, germinating or sprouted kernels are visible. Unfortunately, milder rain events produce alpha-amylase before the kernel is visibly sprouted, as the kernel prepares to mobilize starch into sugars to fuel seedling growth.

The higher temperatures that occurred during grain fill in 2021 and 2022 have provided information about the effects of heat on LMA and preharvest sprouting. Higher temperatures reduced the occurrence of alpha-amylase from LMA in Pacific Northwest (PNW) wheat leading to higher falling numbers. Most preharvest sprouting tolerance results from seed dormancy, the inability of mature grain to germinate until it has lost dormancy, through after-ripening during dry storage. Higher temperatures during grain filling were associated with reduced dormancy in grain and higher sprouting scores when field-grown winter wheat was placed under a greenhouse misting system. Wheat that has experienced high temperatures during grain filling may be more likely to sprout if there is rain before harvest. On the other hand, heat may result in higher grain protein, which tends to support higher falling numbers. Another consideration is that wheat grain doesn’t like to germinate at temperatures over 90 degrees F. High temperatures during fall planting may increase problems with poor emergence.

The FN method is a 1960s invention with good and bad points. FN protects millers and bakers from losses and has been used to preserve some of the grains’ value through blending. Because alpha-amylase is a catalyst, a very small amount of low FN grain can spoil a great deal of sound grain. The liquefaction equation developed by the FN inventor Hagberg can calculate blending ratios. Paul Katovich, CEO of HighLine Grain Growers, has reduced or eliminated farmers’ discounts through careful application of this equation. Blending is a risky business since it takes a great deal of sound grain to blend off grain with a FN of 260, and a truckload of grain below 250 may be beyond rescue in a bad year when insufficient sound grain is available for blending. On the other hand, the FN method is too slow and technically challenging to allow rapid identification of low FN truckloads as grain arrives at the elevator. Moreover, the FN method suffers from variation with different users and devices. For this reason, researchers are developing alternative methods.

Immunoassays, like those used to test for COVID, could quickly check truckloads for high alpha-amylase and low falling numbers. A study from Washington State University (WSU) and the U.S. Department of Agriculture (USDA) showed that a combination of two antibodies can quantify alpha-amylase levels in wheat meal. The PNW scientists have joined forces with EnviroLogix Inc. to improve assay sensitivity and develop a product calibrated to predict falling numbers. EnviroLogix successfully developed and marketed the antibody test kit for vomitoxin (DON) in cereal grain, as well as a wide range of products for detecting genetically modified organisms (GMOs) and mycotoxins in food.

An important aspect to managing the FN problem is knowing in which years it is important to test those truckloads of grain as they roll in. Whenever I am asked if it’s going to be a bad year for falling numbers, the answer lies in modeling weather events, which is outside my skillset. That skill belongs to new USDA scientist, computational biologist Xianran Li. My research in Washington and that of Juliet Marshall at the University of Idaho have been measuring falling numbers of multi-location variety trials for close to 10 years. Li will use these datasets, together with weather data, to generate prediction models for FN and other traits. Li will not be able to predict the future, but his models should give marketers a heads up at harvest time. Julia Piaskowski of the University of Idaho is generating a comprehensive variety trial database that will include FN and other traits for use in cross-year comparisons for the PNW.

Breeding for resistance is essential to reducing risk of low falling numbers. My work with other researchers at USDA and WSU has mapped genes and loci that increase resistance to LMA and preharvest sprouting in PNW wheat. Seven quantitative trait loci (QTL) associated with LMA tolerance were mapped in spring wheat. Association mapping studies in winter wheat identified over 30 QTL for preharvest sprouting tolerance, but only five of these were effective in multiple environments. A locus on chromosome 2D was confirmed in a two-parent population. A major new locus on chromosome 2D derived from PNW winter club wheat accounted for up to 30% of the variation in preharvest sprouting tolerance. Current efforts are aimed at validating these markers and assessing how well they predict falling numbers. Moreover, we have taken the first steps towards genomic selection for preharvest sprouting tolerance in the WSU winter wheat breeding program, an approach allowing the selection of many small additive effects instead of just major genes. The USDA unit at WSU will be joined by Alison Thompson, who will lead efforts to develop improved “breeder friendly” screening and genetic selection strategies for higher FN scores. 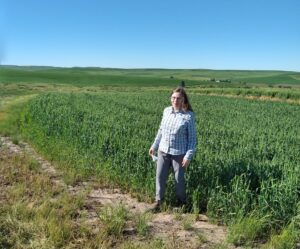 Camille M. Steber, Ph.D., is a research molecular geneticist and the principal investigator for the Steber Laboratory, which is part of the USDA-ARS Wheat Health, Genetics and Quality Unit; and adjunct faculty in the Department of Crop and Soil Sciences at Washington State University. Read more about Dr. Steber..