At first, they did the work by hand, cutting and gathering wheat, barley, pea, lentil and chickpea crops from small test plots. Specially made combines for the research plots were an improvement, but they still were labor-intensive to operate. 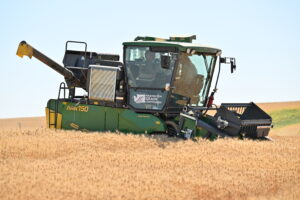 With the arrival of two new Zurn plot combine harvesters, students and faculty have access to similar technology, safety and comfort found in commercial rigs, said Arron Carter, a professor in the Department of Crop and Soil Sciences and the O.A. Vogel Endowed Chair of Wheat Breeding and Genetics. The machines cut, thresh, weigh and bag samples, with special features to prevent cross-contamination between plots.

“It was a natural fit for the WGC to help out when we learned the winter and spring wheat breeding programs at WSU needed new equipment for harvesting test plots,” said Glen Squires, former CEO of the Washington Grain Commission. “Research through the Crop and Soil Sciences Department is a foundational part of helping advance the small grains industry in Washington.”

Similar generosity created Spillman Farm in 1955 as Washington farmers, WSU and the U.S. Department of Agriculture saw the need for a dedicated research field for plant breeding and cultivar development.

Angela Senter worked at Spillman Farm as an agricultural education student in the late 1990s to early 2000s.

“It should have been an awful experience,” she said of the old combine, describing how one person would drive the harvester while the other sat on a seat mounted on the side of the machine, bagging the seed and spraying the header to prevent cross-contamination. “It was hot, it was dirty, it was long, but actually, it was super fun. I loved it.”

The new Zurn combine has an air-conditioned cab where both workers can sit in ergonomic comfort, monitoring a range of data about each test plot.

There are about 5,000 test plots on Spillman Farm’s 382 acres, Carter said, where crops are bred for resistance to disease, various growing conditions and to increase their nutritional value. The farm also hosts an annual field day for growers; this year about 80 attended.

“We show growers our different research plots and talk about new varieties being developed,” he said. “We talk to them about their experiences and challenges. It’s a two-way interaction, because most everything we do is for the farmer.”

Spillman Farm lets WSU “put research into practice,” added Senter. “It doesn’t do much good for the economy or for research in general if everything stays in an academic paper.”

This article was reprinted in the December 2022 issue of Wheat Life Magazine. Originally posted to WSU Insider Sept. 22, 2022.

Addy Hatch is a writer for Washington State University Marketing and Communications.