Making the best of a bad year

What a difference a year makes! It is not an understatement to say that 2021 was a challenging year for wheat production across Washington state due to the drought, and that was particularly true for spring wheat. Yields and test weights were down across the board with yields running anywhere from 15 to 88 percent lower than 2020, and test weights down by roughly two pounds per bushel. Our highest yielding dryland site averaged 44 bushels per acre at Palouse, while our lowest yielding site averaged only 6 bushels at Lind. For the second year in a row, Reardan stood out with the highest trial average test weight at 61.6 pounds per bushel in the soft white trial, and Almira hard red spring averaged the lowest at 54.4 pounds per bushel. 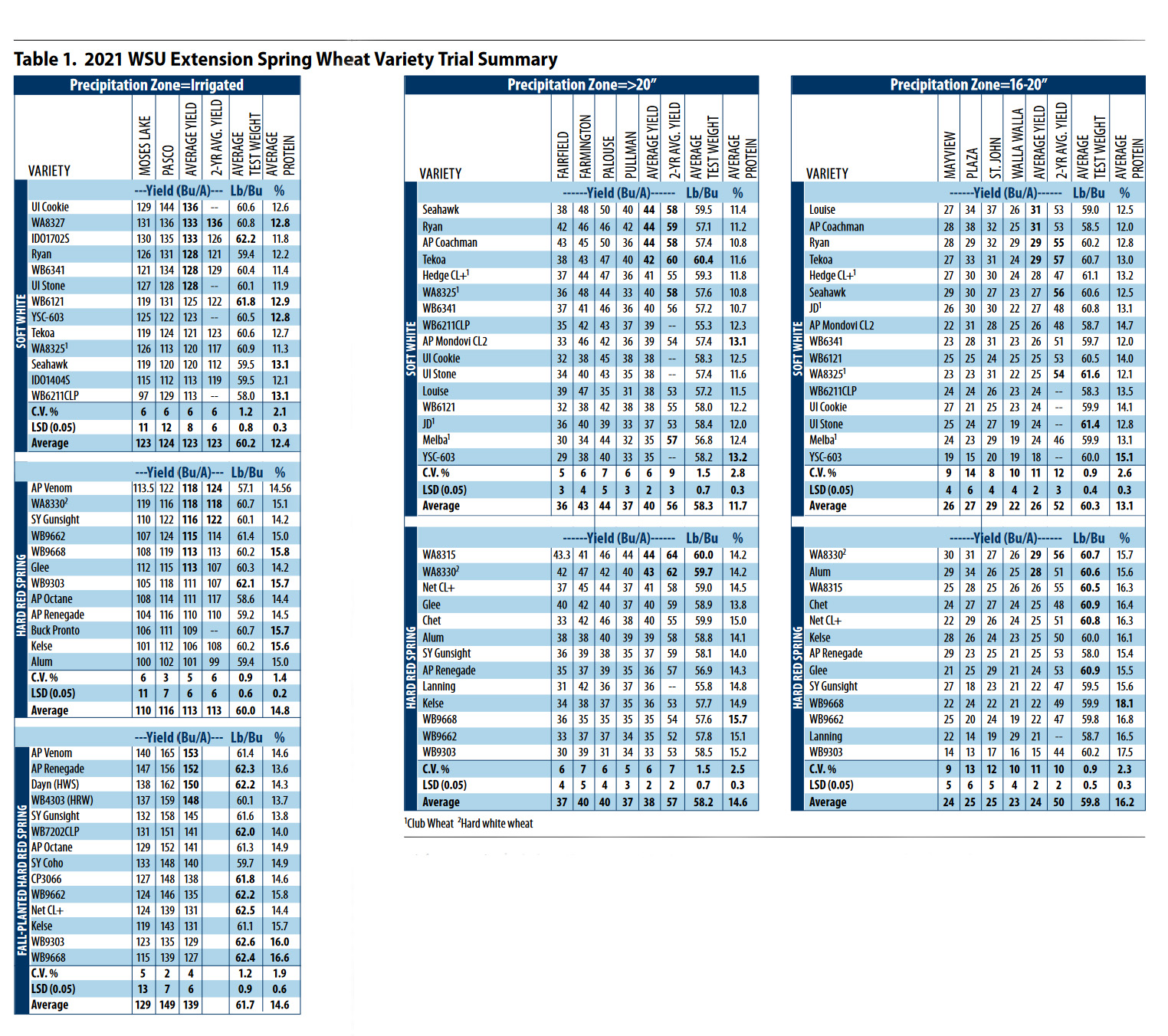 New entries for 2021 include “UI Cookie,” “UI Stone” and “WB6211CLP” in the soft white spring trial, and “Lanning” in the hard red spring trial. Both UI Cookie and UI Stone came out of the University of Idaho breeding program and were released in 2020 and 2012, respectively. Lanning comes from the Montana State University breeding program and was released in 2016. Overall, both UI Cookie and UI Stone yielded two bushels per acre below the trial average in each dryland precipitation zone. UI Stone consistently beat the trial average for test weight by more than one pound per bushel, except in the more-than-20-inch zone, while UI Cookie fluctuated around the trial average. Under irrigation, both varieties performed very well in 2021, with UI Cookie topping the trial, and UI Stone also falling into the top-yielding group. WB6211CLP is meant as a replacement for “WB-1035CL+.” It hit the trial average in the below-12-inch precipitation zone, but ranged between one and three bushels below that in the other zones. It also consistently had one of the lowest test weights in the trial. In the hard red spring trials, Lanning consistently yielded two to three bushel per acre below average with the exception of Almira where it landed in the top-yielding group. Test weight was generally one to two pounds per bushel less as well while grain protein was near average for the trial.

When looking at soft white spring variety performance for all entries across precipitation zones, ‘“AP Coachman”and “Ryan” both continued to perform well, landing in the top yielding group in every dryland zone. “Tekoa” and “Louise” also handled the tough growing conditions better than most, yielding near the top in three and two zones, respectively, out of four. “Seahawk” numerically was the best across all sites in the more-than-20-inch zone, while “AP Mondovi CL2” did well in relation to others in the below-12-inch zone this year. In the spring-planted irrigated sites, UI Cookie, Ryan, “WB6341,” and UI Stone all led the pack for yield with “WB6121” achieving the best test weight.

In the hard spring wheat trials, I think it is important to mention how impressive some of the new experimental material is looking and performing. “WA8315” and “WA8330” (hard white) are leading the trial in every precipitation zone on multiyear averages. They also stood up well to the extreme conditions in 2021, highlighting their yield stability. There are other, newer lines from both the WSU and Croplan programs that also yielded well across all precipitation zones in their first year, sometimes outstripping even the best released varieties, so growers should keep an eye out in the future for when some of these lines will be released, though we are still two to three years out from widespread seed availability. On the named variety side, “Net CL+,” “Glee,” “Chet” and “Alum” all did well in the more-than-20-inch precipitation zone, whereas Alum stood alone as the best named variety in the 16-20 inch zone. Chet, Net CL+, Alum, “Kelse” and “SY Gunsight” also did well in the below-12-inch zone, however, there was little agreement in rankings across locations in the 12-to-16-inch zone and very little separation across named varieties when looking at the regional average.

In 2021, the program added two fall-planted hard red spring trials at our irrigated sites in Moses Lake and Pasco. Those trials are in the ground again for the 2022 season along with a dryland site at Dayton. The best yielding entry, “AP Venom” was numerically five bushels higher than the hard red winter wheat check “WB4303” when averaged across the two sites in 2021. Granted, the later planting date (Nov. 2 for Pasco and Oct. 30 for Moses Lake) certainly favored the earlier spring varieties, particularly during the early heat last summer. “AP Renegade” and “Dayn” (hard white) were also statistically in the top-yielding group.

When possible, growers are always encouraged to view multiple years and multiple locations of data for making varietal comparisons to better estimate the stability in varietal performance across environments. A good variety is one that can reliably perform well across multiple environments. This article includes a two-year average for most entries, but three and five-year averages are available for some at smallgrains.wsu.edu. 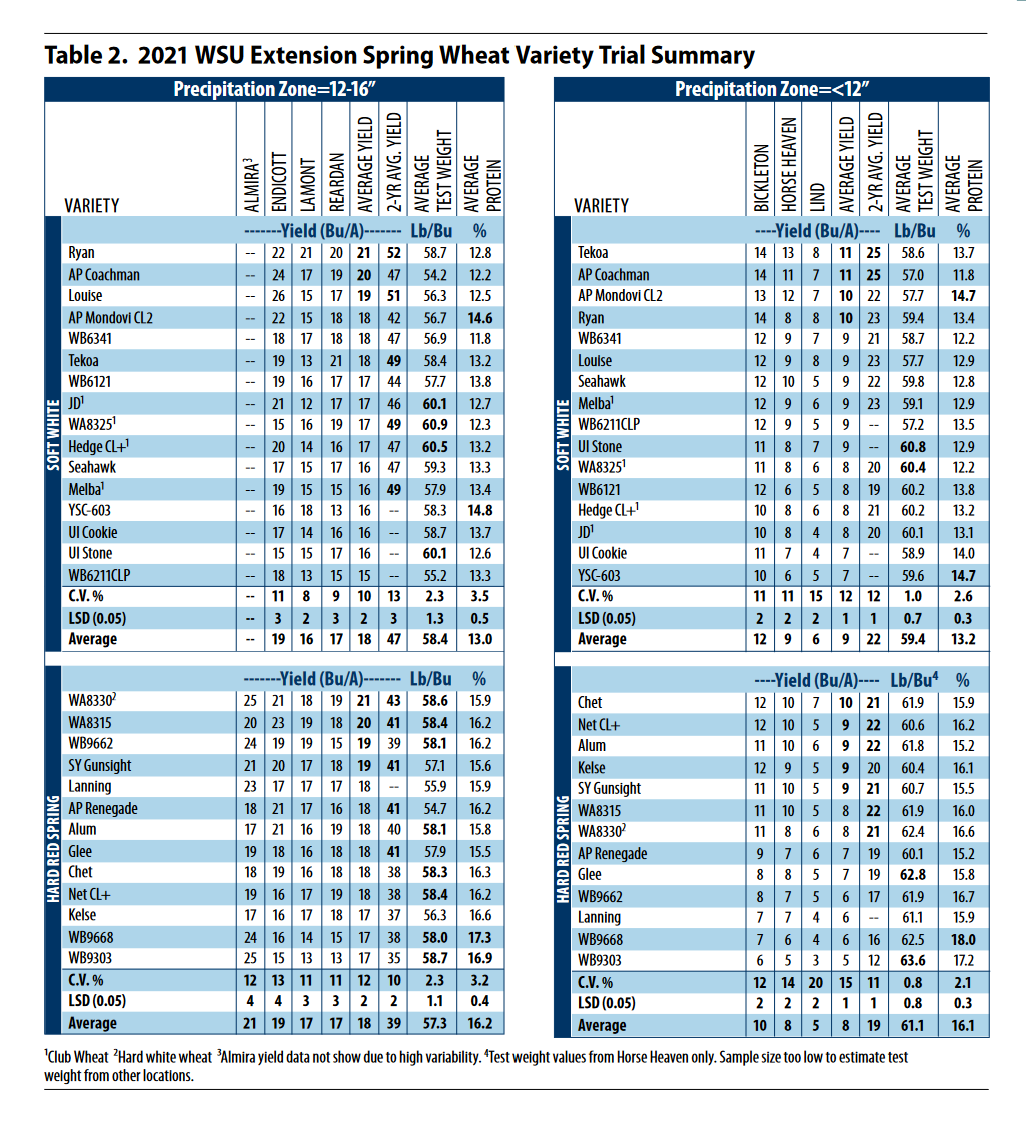 In coordination with other programs at WSU, University of Idaho and U.S. Department of Agriculture’s Agricultural Research Service, entries in the WSU Variety Testing Program are screened for disease resistance, insect resistance, acid soil tolerance, falling numbers and end-use quality, among others. Be sure to check out these ratings in the final 2021 technical report on our small grains website (smallgrains.wsu.edu) or through our variety selection tool either through our website (varietyselection.cahnrs.wsu.edu) or on our new “WSU Variety Selection” tool mobile app. The Washington Grain Commission also publishes a “Preferred Wheat Varieties” brochure on its publications web page with end-use quality ratings for commercial varieties. If you have any questions or concerns, please feel free to contact me.

Acknowledgements: Funding for supplies, travel and technical support for the WSU Extension Cereal Variety Testing Program is provided by the Washington Grain Commission. Facilities, salary and equipment are provided by WSU administration. We are grateful for the many on-farm cooperators we partner with to conduct these trials around the state. They are essential for producing quality data, and their donations of land, time and resources are appreciated. 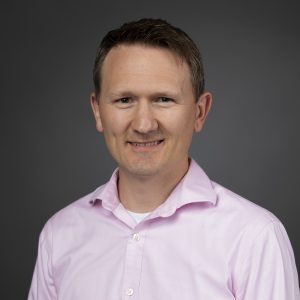