The sheer abundance of wheat grain around us is evident from the large piles of grain at regional elevators and transport sites. Yet, food insecurity is on the rise again in much of the world due to a combination of old and recent conflicts, population displacement, climate change, and many other factors. In 2022, the Food and Agriculture Organization of the United Nations estimated that over 2.3 billion people, or almost 30 percent of the global population, did not have adequate food, with over half of these people in Asia and another third in Africa. Across the globe, food shortages are more prevalent among women and the poor.

Malnutrition includes undernutrition, micronutrient deficiencies and obesity. Healthy diets are lacking or expensive in many parts of the world, including the U.S. Globally, 15 crops supply most human calories, with half of them supplied by rice, maize, sugarcane, barley and wheat. Plant breeding and improvements in production have increased the availability of calories, but these improvements are associated with a decrease in micronutrients. Fortunately, genetic variation exists in wheat and other plants for uptake of micronutrients. Therefore, while the availability of micronutrients can be obtained through consumption of a balanced diet including vegetables, grain and protein sources like animal products and pulses, increasing the amount of minerals such as iron and zinc in staples like wheat will also have a positive effect on reducing nutrient deficiencies.

Wheat is the second major human food grain, both in terms of acreage and consumption, with approximately 70 pounds consumed by each person per year, including the U.S., so even small increases will have a positive effect. Biofortification in grain crops is led internationally by the HarvestPlus program and the International Maize and Wheat Improvement Center (CIMMYT). Washington State University (WSU) and the U.S. Department of Agriculture (USDA) have had close collaborations with CIMMYT for many years, and they have demonstrated the success in breeding for improved mineral nutrition through the release of 22 high zinc wheat cultivars to countries in Latin America and Asia.

In 2018, we began a project to incorporate selection for improved mineral nutrition into the USDA and WSU wheat breeding programs. This project was led by graduate students Emily Klarquist, Lance Merrick and Aicha Djibo Waziri. Our initial grant, Biofortifying Wheat Using Selection, Introgression, and Reverse Genetics, from the USDA-National Institute of Food and Agriculture-Agriculture Food and Research Initiative (USDA-NIFA-AFRI), has the goal of assessing current variation for iron and zinc concentration in Pacific Northwest hard red spring wheat, develop breeding populations, and to select using genomic selection and assessment of mineral concentrations. In addition, we aim to reduce the levels of the antinutritional compound phytate, which occurs naturally in grains but impairs the absorption of iron, zinc and calcium. Currently, we have created the populations and conducted the genomic analysis. We have grown multiple spring wheat populations in the field since 2020 and collected grain samples for analysis.

Wheat breeders are known for their collaborations with many other disciplines. The biofortification project has been unique in the breadth of collaboration, including plant breeders and physiologists, soil microbiologists, agronomists, biochemists, food scientists, and environmental health specialists.

We have discovered that the challenge to developing effective screening tools for mineral concentration and phytate for a large number of samples was more difficult than we expected. Wheat samples with known zinc and iron concentrations were sent to us by Velu Govindan of CIMMYT so we can combine them with our samples to develop our equipment calibrations. With persistence and the assistance of Jessica Braden in the WSU Sustainable Seed Systems Laboratory and Laura Bartley in the Institute of Biological Chemistry, we have developed reliable screening systems. We are using a variety of tools, including a benchtop energy dispersive X-Ray Fluorescence machine for iron, zinc and calcium, and microwave plasma atomic emission spectrometry for elements in smaller concentrations such as in white flour.

Phytate can be analyzed using high-performance liquid chromatography. We also had to develop standardized methods to harvest, thresh and clean grain samples to avoid contamination from soil and metal parts in combines and threshing machines.

Our goal is to increase the mineral nutrition of all the classes of wheat that we grow in the Pacific Northwest. This will take time, however, because increased levels of minerals are correlated with increased protein and negatively correlated with increased yield. So we are starting with hard winter and hard spring wheat and selecting for agronomic performance and increased mineral nutrition together. We will also assay club wheat and soft white wheat to learn how much variation exists and set reasonable breeding goals that don’t sacrifice soft wheat end use quality or grain yield. Our ideal varieties (see Figure 2) will be agronomically competitive with existing cultivars and have higher levels of mineral nutrients important for human health. With the exception of zinc, the range of nutrients present in our current cultivars and breeding lines overlaps that of high nutrient selections from CIMMYT. For zinc, we will have to make additional crosses to bring in new variation. A remaining challenge is that soil zinc concentrations are low in many parts of Washington, such as Lind where WSU test plots are located. We have been testing various soil-applied fertilizers to add zinc. The additional zinc can also contribute to improved crop performance, resulting in a winning combination for wheat growers and the public.

This article originally appeared in the December 2022 issue of Wheat Life Magazine. 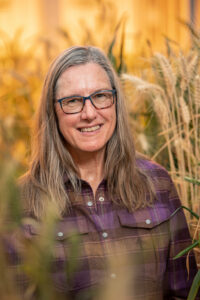 Kimberly Garland Campbell, Ph.D., is a USDA plant research geneticist and club wheat breeder at the USDA-ARS in Pullman, Washington. Her research focuses on genetics and breeding of wheat responses to abiotic and biotic stress; breeding wheat for winter survival; enhancing quality, functionality and marketability in the in the western U.S. of soft white and club wheat; and control of rusts of cereal crops. Read more about Dr. Campbell..