By Karen A. Sanguinet

The study of root systems in a variety of crop plants has received a tremendous amount of attention recently. Historically, plant breeders have selected for above-ground traits such as plant biomass and yield. However, the selection of shoot traits has resulted in a reduction in root biomass in cultivated wheat varieties relative to wild relatives and landraces.

As a forage organ, roots are essential for water and nutrient uptake. Thus, root function is key to survival during periods of heat and drought. Several studies have shown that deeper rooting wheat varieties lead to cooler canopy temperatures and also to increased yields.

Research in my crop physiology lab supported by the Washington Grain Commission has allowed us to investigate wheat varieties from the Pacific Northwest and compare their root structures both in the field and in the greenhouse. The goal of this work is to understand how root systems grow and respond to their soil environment in order to improve stress resilience.

We found that there is a negative correlation between root diameter and overall root area, which has also been documented in other crops such as rice and corn. This means that the larger the root system the smaller the root diameter particularly in the lateral root and higher order root branches. It also means that the larger root system has potentially more access to moisture and mineral nutrients.

We also found a correlation between heading date and root area. These data indicate that wheat cultivars take two strategies to deal with stress such as drought—either escape or avoidance. To escape drought and heat, some varieties flower early and as such don’t establish very extensive root systems. An example of a wheat variety that flowers early with a reduced root system is the hard red spring wheat variety Hollis (see figure, image on the left).

On the other side, some drought tolerant wheat varieties put more energy and carbon for growth below ground to avoid drought stress and access soil moisture, which comes as a tradeoff and is correlated with later flowering (see figure, image on the right).

However, storing more carbon belowground is advantageous in subsequent years and provides an energy source for soil microbes. In fact, this is a major reason why there is interest in perennial grains to sequester carbon in the soil.

We have also compared perennial and annual wheat roots in the field. The main differences are the decreased root mortality rates and consistent growth of perennial root systems. The challenge is balancing root growth with grain fill and ultimately yield in perennial grains.

Another area that we are investigating is the chemical composition of the cell wall of roots. For example, the breakdown of wheat straw is correlated to the cell wall composition and the amount and type of lignin found in the straw. Similarly, we find that root lignin is important for both root growth as well as water movement, breakdown of roots in soil and disease resistance. However, we don’t yet know all of the drivers of root lignin content nor do we understand how it is regulated relative to shoot lignin. For example, do varieties with slower straw breakdown have slower root breakdown? While we don’t yet know the answer to that question, we hope to soon find some hints by chemically and comparatively analyzing root and shoot lignin in wheat varieties important to PNW farmers.

One of the main challenges to studying root systems is that they vary both within a field and between years, which is known as phenotypic plasticity. The good news is that phenotypic plasticity has an underlying genetic component so that selection and improvements are possible. Despite these challenges, we are looking for clues belowground to continually improve PNW wheat root systems in what many researchers have called the final frontier for crop improvement.

This article is republished from the October 2021 issue of Wheat Life Magazine. 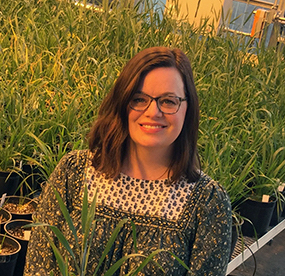 Karen Sanguinet is an associate professor and scientist in the Department of Crop and Soil Sciences at Washington State University. Her lab focus on factors that modulate growth and development. Through characterization and analysis of a suite of root mutants and natural accessions in Brachypodium distachyon, her aim is to gain insight into the quantitative and qualitative control of homorhizic root architecture typical of the grasses. She is also interested in understanding the link between hormonal crosstalk and how the cell wall constrains morphogenesis. Read more about Dr. Sanguinet.