IMPORTANT: Some of the pesticides discussed in this presentation were tested under an experimental use permit granted by the Washington State Department of Agriculture (WSDA). Application of a pesticide to a crop or site that is not on the label is a violation of pesticide law and may subject the applicator to civil penalties of up to $7,500. In addition, such an application may also result in illegal residues that could subject the crop to seizure or embargo action by WSDA and/or the U.S. Food and Drug Administration. It is your responsibility to check the label before using the product to ensure lawful use and obtain all necessary permits in advance.

Rush skeletonweed is a deep-rooted perennial forb in the sunflower family (Asteraceae). It is of Eurasian origin and is invasive in Australia, Argentina, Canada and the U.S. In Australia, wheat yield has been reduced as much as 80 percent in areas heavily infested with rush skeletonweed. In North America, the species is most prevalent in disturbed rangeland and other noncrop areas, particularly in the Northwest, where it occupies an estimated 6.2 million acres of rangeland. Rush skeletonweed substantially expanded its range in Eastern Washington when farmland was placed into the Conservation Reserve Program (CRP) and not controlled during the CRP contract period. As infested CRP acres are returned to wheat production, rush skeletonweed persists largely because standard weed management strategies used in the winter wheat/summer fallow (WW/SF) production region are insufficient.

While yield loss resulting from direct competition with the crop is of concern, moisture use by skeletonweed plants during the fallow period of the rotation is of greater concern. In areas where poorly controlled skeletonweed depletes seed zone moisture during the fallow period, wheat stands either fail to establish or have markedly delayed or reduced emergence and stand establishment. Both cases result in reduced yield potential. The fallow period is critical for rush skeletonweed control because it can flourish without competition from the crop, but also, more herbicide options are available that can help reduce the populations over time.

We conducted field trials at three locations in Eastern Washington from fall 2017 through summer 2020 to test herbicide strategies for rush skeletonweed control during the fallow period. Two locations were near LaCrosse, Wash., and one near Hay, Wash. All three locations had been infested with rush skeletonweed during the CRP contract period (Table 1). The LaCrosse 2017 trial ran from 2017-19 and was managed with tillage during the fallow period in a WW/SF rotation. The LaCrosse 2018 and Hay trials ran from 2018–20 and were managed in a no-till WW/SF rotation. Experimental treatments were applied either in October following wheat harvest, April of the fallow year, or June/July when rush skeletonweed plants were bolting. At both LaCrosse sites, plants had experienced a frost or freeze prior to the fall applications as evidenced by a dull green stem color and cessation of flowering. Plants at the Hay site were still green and actively flowering at the time of application, suggesting they did not experience the same cold temperatures.

Treatment efficacy was determined by counting rush skeletonweed plants in each plot in June and August of the fallow year and comparing those densities with the initial densities from October following wheat harvest. Overall, picloram (Tordon 22K) applied in the fall provided complete control of rush skeletonweed through June of the SF year at all three locations (Table 1). Picloram has long been known to be very active on rush skeletonweed, which is likely due to long soil persistence as well as better leaf penetration and root activity. However, picloram is not recommended for spring applications in SF because of potential crop injury.

Fall-applied treatments with clopyralid (Stinger and Curtail) reduced the initial density of rush skeletonweed compared to the nontreated control at both LaCrosse sites. However, these treatments were not effective at Hay. At the August census (data not shown), picloram continued to provide superior control of rush skeletonweed at the two LaCrosse sites. However, picloram was no longer effective at Hay. The lack of frost or freezing temperatures at Hay prior to the fall applications could explain the lack of control in August. In other Asteraceae species such as Canada thistle, dandelion and chicory, freezing temperatures in the fall signal the plant to convert long-chain storage carbohydrates into shortchain fructans and sucrose, which act as antifreeze to help protect the roots from freezing during the winter. Fall applications of synthetic auxin herbicides following frosts or freezes interfere with this process, leaving the plants more susceptible to winter kill.

Spring- and summer-applied treatments were largely ineffective for the control of rush skeletonweed in fallow and may only be beneficial for burning down rush skeletonweed to preserve soil moisture for the subsequent wheat crop. Our nonexperimental summer maintenance treatments included glyphosate and saflufenacil (Sharpen) to achieve this goal. In the subsequent wheat crop, rush skeletonweed density remained low at 12 percent of initial density in the fall picloram-treated plots at both LaCrosse sites but was not different from the nontreated control at Hay. Of the treatments applied, only aminopyralid (Milestone) is not labeled for use in wheat or fallow (see disclaimer at the end of the article). Picloram was applied at the maximum labeled rate. Wheat yield was only reduced at LaCrosse 2018 with the spring-applied treatment of aminopyralid. However, grower experience suggests that picloram carryover can be a problem in some, particularly dry, years.

For long-term control, the first step should be to control rush skeletonweed before land is taken out of CRP and returned to wheat production. Once in production, a labeled rate of picloram applied postharvest in the fall following a frost or light freeze and then followed by effective burn-down treatments if needed during the SF period to preserve soil moisture, may be a good approach. It is also important to plant and fertilize winterwheat at optimum times and rates to promote establishment of a competitive wheat crop. Clopyralid, in various products, is labeled for application in the wheat crop and if applied correctly, can provide some control or suppression before the next fallow year. As per the label, spring clopyralid applications should not occur directly before a frost. Long-term control of rush skeletonweed in WW/SF systems will likely require consistent effort over several crop rotation cycles. 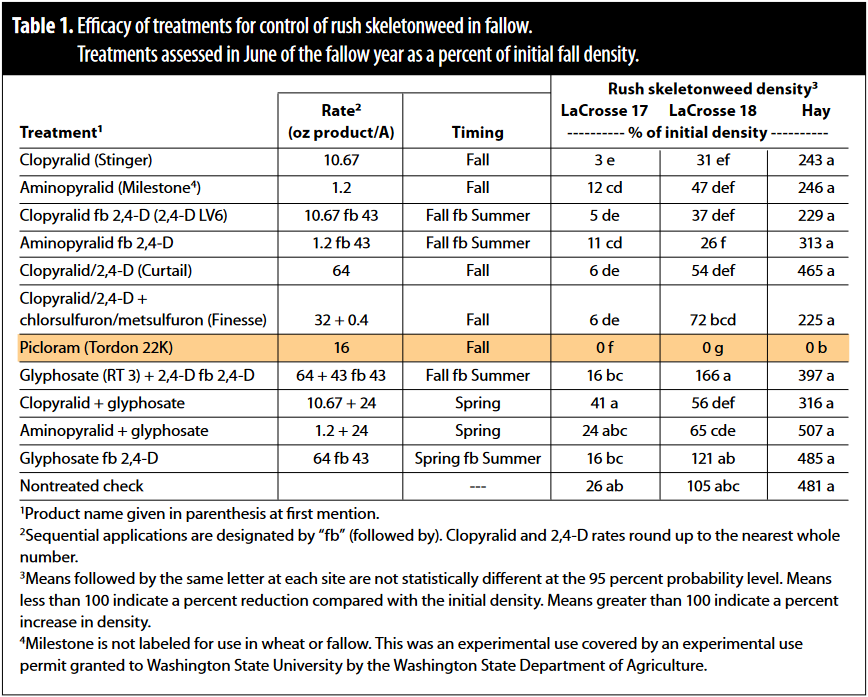 This article originally appeared in the July 2022 issue of Wheat Life Magazine. 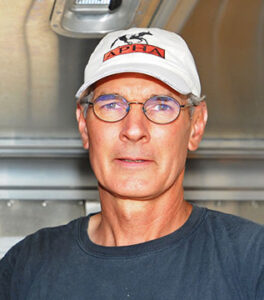 Mark Throne is an associate in research in the Department of Crop and Soil Sciences at Washington State University. His research focus is to understand and develop mechanisms and strategies to increase quality, productivity, and sustainability in managed ecosystems. Read more about Dr. Thorne.