Washington wheat growers and the entire wheat-based industry have been adapting to the seemingly ever-increasing number of varieties of wheat to choose from. We have a unique challenge and opportunity in the Pacific Northwest (PNW), where all market classes of wheat can be produced reliably, including spring and winter types. Much of the wheat production area in Washington is in a rotation that includes winter wheat as a keystone crop, followed by spring wheat in a multiyear cycle. Rotational crops need to fit in a system where each crop contributes to and improves the overall productivity of the system.

Herbicide-tolerant varieties of winter wheat, specifically ClearfieldTM varieties, have impacted typical rotation practices due to restrictions caused by the persistence of BeyondTM and other Group 2 ALS-inhibiting herbicides in soils in the PNW. Many acres in the PNW have been treated with Group 2 herbicides, which include Imidazolinones (IMIs) used on legume crops as Pursuit or Raptor, or as Beyond in Clearfield wheat, and may persist in our soils from months to years, based on herbicide chemistry, soil chemical and physical properties (particularly pH and organic matter content), moisture and temperature. So, even more spring wheat varieties are needed due to the need for Beyond-tolerant spring wheat.

The need for Clearfield spring wheat varieties has been recognized for more than a decade in Washington. In 2022, that demand seems clearer than ever.

Clearfield varieties of spring wheat must contain two genes for Beyond tolerance, referred to as CL+, CLP or CL Plus, to be approved for release. Combining that requirement with the absence of CL+ breeding efforts in the Washington State University (WSU) spring wheat breeding program prior to 2010 has meant that it has taken nearly a decade of breeding efforts to catch up with this market need.

“With the shifting window of seeding time and the popularity of winter Clearfield varieties, Clearfield spring wheats are needed and are becoming a pivotal part of farmers’ yearly production plans. Not only the wheat itself, but minimizing chemical residual plant backs as well,” Ritzville-based wheat grower and Washington Grain Commissioner Mike Miller noted. Miller further explained that “a Clearfield spring wheat will provide farmers more flexibility in their production plans to combat the growing presence of resistant weeds.”

The WSU spring wheat program released our first CL+ variety in 2019, Net CL+, a hard red spring wheat that is top performing and broadly adapted across Washington production areas. Net CL+ is among the highest yielding hard red spring wheat varieties across all dryland production areas, with excellent test weight, grain protein concentration higher than other varieties with similar yield potential, Hessian fly resistance, very good adult plant stripe rust resistance and is one of the highest end-use quality varieties available. In 2021, approximately 9,000 acres were seeded in Washington due to seed availability after a year of seed-dealer multiplication in 2020.

Hedge CL+, a spring club wheat variety with a JD background, was released in 2020, initially multiplied in 2021, and seed is available in limited quantity in 2022. Hedge CL+ has performed equal or better than JD based on three-year averages in all dryland production zones. As essentially a JD twin variety with CL+ traits added, Hedge CL+ has nearly identical maturity, height, straw strength, rust resistance, test weight, protein, end-use quality and other measured traits. WSU Variety Testing Program trials are not conducted on fields with known recent Beyond treatment, so yield differences due to carryover tolerance are not intentionally accounted for in this yield data and other traits measured.

Ian Burke, WSU professor and J. Cook Endowed Chair of Wheat Research, believes that such varieties of spring wheat will provide “a nice tool for all rainfall zones to throw at difficult winter annual grass weed problems and for rotational flexibility when growing winter Clearfield wheat.” Clearfield spring wheat could also be used in a facultative role, where spring wheat is seeded during the winter. Winter seeding allows for management of fall annual weeds, particularly downy brome, while minimizing the impact of lower spring wheat crop yield in the low rainfall zone.

The goal of the WSU spring wheat breeding program is to provide wheat variety options for these situations that fit into diverse rotation systems, across diverse production areas. At the same time, we believe that there should be equal or better performance compared to conventional spring wheat varieties even in the absence of soil residual herbicide.

This article originally appeared in the March 2022 issue of Wheat Life Magazine. 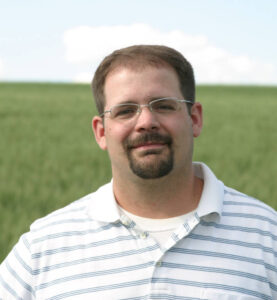