Plants use light energy to make grains, and they need a lot of it. However, collecting the energy and then converting it into useful chemicals by the process called photosynthesis is a dangerous business. Photosynthesis also generates a highly toxic by-product, reactive oxygen species (ROS). ROS causes oxidative damage to structures inside cells known as the organelles. Just like organs in our body, organelles perform specific functions inside cells (Figure 1). Too much oxidative damage will harm plant health or can even kill it.

A sophisticated system of ROS scavengers works hard to reduce the oxidative damage. The problem is, this system is vulnerable to environmental conditions. During the peak growth season from the middle of May to the middle of July, the sunlight becomes excruciatingly bright by the afternoon. High light intensity increases ROS production.

To make matters worse, the afternoon temperatures rise, frequently reaching more than 100 degrees F during Washington summers. High temperatures make the ROS scavenging system less efficient. Plants can reduce their body temperature by evaporating water from the leaf surface, however, this strategy fails if rains are scarce. Bright light together with heat and drought overpower the ROS scavenging system, resulting in excessive oxidative damage to the organelles.

Luckily, both the light intensity and the temperatures fall in the evening, giving plants a much-needed break to deal with the damage. Slightly affected organelles can be fixed by replacing the broken parts. If the damages extend beyond repair, the organelle must be replaced. Production of new organelles is easy; cells have established assembly lines. The question is, what to do with the old ones? Unable to function, they become junk and get in the way of the working organelles.

Why do cells make recycling of damaged organelles so complex? Can the digestion be done in the cytoplasm? The answer is this complex machinery is necessary to prevent damage to the working organelles. The enzymes are toxic and, if accidentally released to the cytoplasm, will destroy everything in the cell. Locking these enzymes inside the vacuole and delivering the damaged organelles inside an autophagosome minimizes the hazard.

Autophagy is not unique to plants. The organelles frequently sustain damage and undergo recycling in the cells of our bodies. The autophagy process becomes less efficient as our body ages. Accumulation of damaged organelles inside our cells can lead to organ failure. Drugs that increase autophagy can alleviate aging.

The ability to recycle building blocks from the damaged organelles for production of new organelles makes autophagy a powerful rejuvenation process that prepares plants for the next round of harsh weather. It is not surprising that plants with more efficient autophagy cope much better with all kind of stresses, including heat and drought. For this reason, breeding programs around the globe pay attention to the autophagy trait. My research team at WSU, which is funded in part by the Washington Grain Commission, works on harnessing the virtues of autophagy for increasing the resiliency of PNW wheat.

This article originally appeared in the December 2021 issue of Wheat Life Magazine. 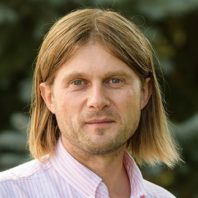 Andrei Smertenko is an associate professor for the Institute of Biological Chemistry at Washington State University. His research lab is part of WSU's Molecular Plant Sciences. Smertenko's research team focuses on the identification and characterization of signaling pathways that control cell proliferation and understanding fundamental molecular mechanisms responsible for cell division. Their aim is to contribute to the development of new ways to improve traits of crops and industrially-important plant species. Read more about Dr. Smertenko.